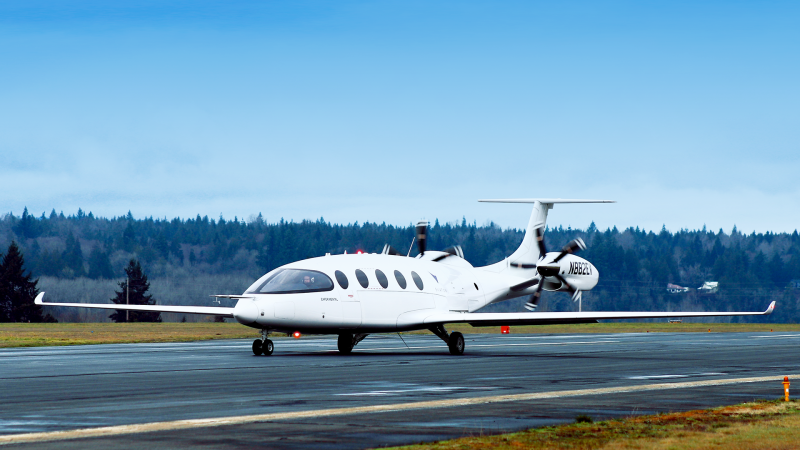 Eviation Alice is targeted at commuter and cargo markets, and will typically operate flights ranging from 150 miles to 250 miles. Cape Air and Global Crossing Airlines, both US-based regional airlines, have placed orders for 75 and 50 Alice aircraft respectively. In 2021, DHL Express announced that it ordered 12 all-electric Alice eCargo planes from Eviation, making it Eviation’s first cargo customer.

The all-electric Alice aircraft features a maximum operating speed of 260 knots and a maximum useful load of 2,500 lbs for passenger version and 2,600 lbs for eCargo version.

Alice is powered by two magni650 electric propulsion units (EPUs) from magniX, the only flight-proven electric propulsion systems at this scale. The magni650 EPU is a 850 SHP / 640 kW / 3,000 N·m – class EPU. Each EPU includes a magni650 motor, 4 X magniDrive 100, and a closed-loop integrated thermal management system.

The EPU is designed to provide the required torque and power turning at low RPMs, the same speed as the propeller. This allows a direct motor-to-propeller connection, eliminating the need for a heavy maintenance-prone gearbox.

A 4×3-phase architecture allows for redundancy, increased reliability and graceful degradation should a fault occur. For example, in the event of a short circuit, one 3-phase section can be turned off, allowing the pilot 75% of full power.

The magniDrive 100 is a multi-application, high-performance power electronics unit including both the inverter and motor controller functions. It is designed as ‘bi-directional’, capable of both DC/AC operation for propulsion and AC/DC operation for generation. It is suitable for HVDC networks of up to 800 VDC.

Designed for unpressurized operation, the magniDrive 100 combines high thermal performance, EMI immunity and lightning protection for metallic and composite structures. The magniDrive 100 can support both analog throttle inputs (for use in retrofits, for example) as well as Fly-By-Wire controls (for newly designed aircraft).