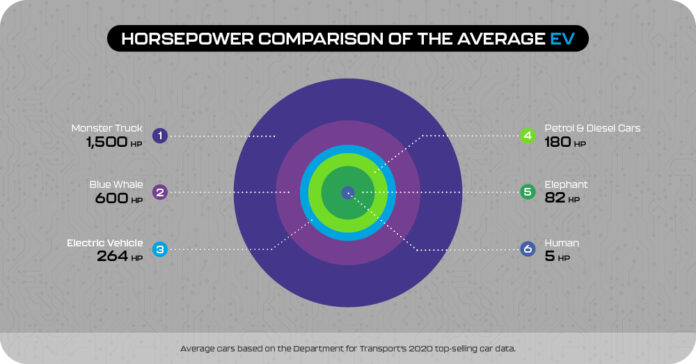 How powerful are electric cars?

There are some pretty common misconceptions about electric vehicles (EVs): they’re notpowerful, they take ages to charge, they’re not actually that great for the environment, to namejust a few. But you might be surprised how they actually stack up against their petrolcounterparts and some other interesting competitors.

To show just how impressive electric vehicles are, Peugeot has compared an average EV,based on the top-selling models in the UK, in key areas like horsepower, speed, charging timeand more with competitors in these fields like animals and planes.

When comparing the best-selling EVs against the best-selling combustion engines, electric carshave a much greater horsepower (HP). EVs have an average of 263.9 HP whereas petrol anddiesel cars have just 180.3 HP – a whopping 83% difference.

Not all EVs are this powerful, but manufacturers are working towards this as EVs become an increasingly common choice over petrol or diesel vehicle.

For a 20 to 80% charge, you can rapid charge an electric car using the highest capacity charger in just 31 minutes. Looking at the equivalent charge, it’ll take over an hour to top up the average smartphone and laptop to the same level.

An EV takes half the time to charge of a phone

You might be surprised to hear that you can charge up an EV in half the time it takes to chargeyour phone using a public rapid charger.

For a 20 to 80% charge, you can rapid charge an electric car using the highest capacity chargerin just 31 minutes.

Looking at the equivalent charge, it’ll take over an hour to top up the averagesmartphone and laptop to the same level.Comparing an EV against something a little bigger like an electric wheelchair, it’ll take you lessthan 10% of the charge time – it’ll take you over five hours to charge the wheelchair.

Considering the size difference, it’s pretty impressive how quickly you can charge an EVcompared to other commonplace electronics, especially with public charge points nowoutnumbering petrol stations.

EVs just miss out when compared to the average combustion engine car for acceleration coming in at 12% lower. However, when it comes to going from 0 to 60 mph, electric cars take the lead.

EVs are 0.4 of a second quicker from 0 – 60 mph than combustion engines, reaching 60 mph in just 6.5 seconds on average. When you consider that the fastest production car reaches 0 to 60 in just 1.9 seconds, EVs are still pretty impressive, especially considering the fastest EV on the market is only 0.9 seconds slower at 1.99.

The average electric car has a top speed 4.7 times quicker than the world’s fastest man,Olympic sprinter Usain Bolt. Usain’s impressive top speed clocks in at 23.35 mph but theaverage EV beats him at 110.7 mph.

It’s not just people EVs can beat when it comes to top speed. When compared to some of theworld’s fastest animals, EVs also come out on top.The average EV is 44% quicker than cheetahs, the fastest land animal whose top speed is 75mph.

They also beat the peregrine falcon whose top horizontal speed is 56 mph (they can reachup to 200 mph when diving but we didn’t want to try this with an electric car).EVs and traditional fuel cars do lose out to the fastest tennis serve – a huge 163.4 mph.

EVs are 40% quieter than cars

An EV with an Acoustic Vehicle Alert System (AVAS) – an artificial sound machine to help pedestrians hear EVs – is just 54bd. A standard car is 80dB and a lorry is 93dB.

As a comparison, a pneumatic drill is 95dB and sperm whales produce an ear-busting 288dB!

Cars are becoming more and more connected with EVs at the forefront thanks to their impressive computing power.

This connectivity involves information being sent to the manufacturer on the driver and internal systems through the internet. It also includes commonplace actions done by the driver like unlocking the car, using the infotainment system etc. These activities all come down to complex programming and can be broken down into lines of code.

Cars currently have around 150 million lines of code but are expected to increase to around 300 million by 2030 with higher levels in EVs.

We created the average EV profile by using the Department for Transport’s 2020 data on the top 16 selling electric cars in the UK. For the average petrol and diesel vehicle, we use the DfT’s 2020 on the top ten selling cars.