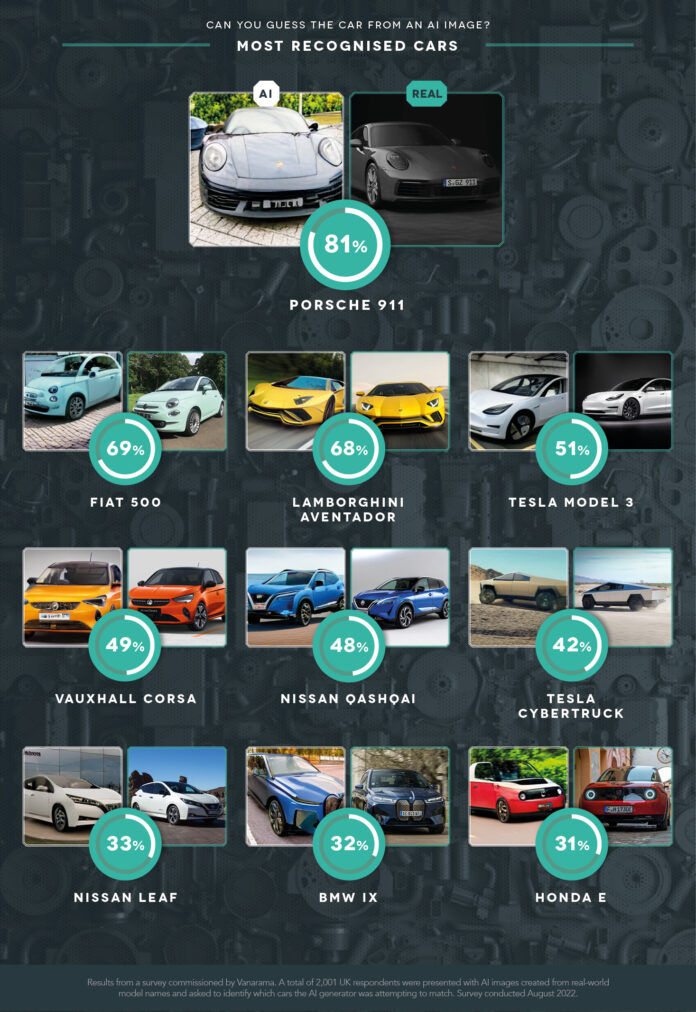 Of the five electric cars in the research, survey results showed that the Tesla Model 3 was the most recognisable AI-generated EV image – with 51% of respondents correctly identifying it.

1.Tesla Model 3 – Recognised by 51% of respondents

As the very first EV to top one million sales, it’s perhaps not surprising that the Tesla Model 3 was the most recognisable all-electric model in Vanarama’s research. The Model 3 also racks up 255,000 online searches every month.

2.Tesla Cybertruck – Recognised by 42% of respondents

3.Nissan Leaf – Recognised by 33% of respondents

Despite the majority of respondents (33%) correctly recognising the AI generator’s attempt at a Nissan Leaf, many struggled. A quarter of those surveyed (25%) believed the AI tool was recreating a Toyota Corolla, while 22% were left totally stumped by the image and couldn’t identify it as any model.

The Nissan was only a fraction more recognisable than the BMW iX, which was correctly identified by 32% of respondents. The BMW iX is a fairly new EV, with a design that’s unlike the rest of the carmaker’s lineup, so it’s not surprising that it wasn’t as easily recognised as the Tesla Model 3.

5.Honda e – Recognised by 31% of respondents

Following just behind the BMW iX is the Honda e, with 31% of respondents correctly identifying the AI-generated image of the car. The model is Honda’s first mass-market, pure-electric car – but despite being launched in Europe it is not yet available in America.

Vanarama used an AI image generator to recreate ten car models using only the model names and editions – e.g. ‘Porsche 911 2022’. The AI images were then used in a 2,001-person survey, in which respondents were presented with each image and asked to correctly identify the car model that the AI image generator had attempted.

E.ON and Nikola Collaborate in an Effort to Decarbonize Heavy-Duty Trucking

BMW and Kith start Season 2 of their successful collaboration with...