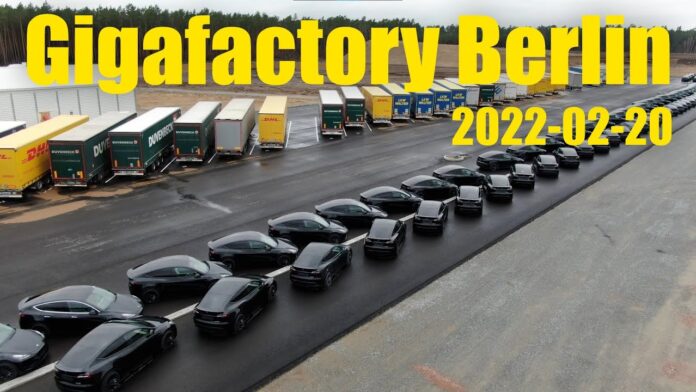 Tesla has been spotted gathering hundreds of Model Y vehicles outside of Gigafactory Berlin – indicating that production is advancing.

However, the regulatory approval to officially start production for customer deliveries is still uncertain.

Gigafactory Berlin, a critical new factory for Tesla’s plans to expand in Europe and improve its manufacturing and distribution efficiency, has been in limbo for months.

The automaker has yet to secure the needed environmental permit to start producing vehicles for customer deliveries.

Last month, Tesla confirmed that it built the first few Model Ys at Gigafactory Berlin at the end of 2021.

The automaker also received approval to build 2,000 Model Y bodies at Gigafactory Berlin ahead of the final approval by the state of Brandenburg.

Tesla said it needed to conduct more tests of its production process.

Those tests seem to be working as Tesla has now been spotted rolling out hundreds of Model Y vehicles from Gigafactory Berlin in a new drone flyover of the plant:

It looks like Tesla is now achieving significant production of the new Model Y in Germany, which is both positive and negative.

When, or if, Tesla receives approval, it will be able to achieve higher production volumes faster, but in the meantime, having this kind of operation at Gigafactory Berlin without creating any revenue is quite costly.

Tesla is investing hundreds of millions in producing those vehicles, and it’s not getting anything out of them now.

If it continues that way without approval, it will start to be a big strain on its income statement.

On the other side, it’s also making Germany look bad for businesses as Tesla’s experience is going to serve as a warning about the country’s bureaucracy, which is becoming a real issue for the new factory project.

Right now, one of the main holdups in the environmental approval appears to be related to water supply.

Tesla had to revise several times its water supply plan as the region is suffering from failing groundwater.

However, Brandenburg Economy Minister Joerg Steinbach said that the situation is manageable for the first phase (Model Y production) of the factory:

The current water supply is sufficient for the first stage of the factory. Once Tesla expands the site, we’ll need more.

Tesla currently plans to use 1.4 million cubic meters of water annually – or the equivalent of the demand for a town of around 40,000 people.

The region is expected to dig more wells to try to compensate for the reduction in groundwater.

In the meantime, it’s still not clear when Tesla could receive its environmental approval for the state to officially start production and deliveries from Gigafactory Berlin.